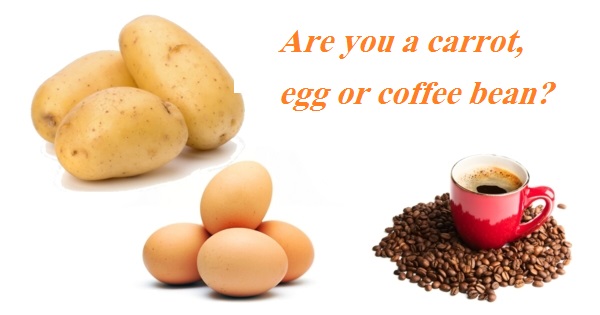 A woman in her early 20s went to mother and she told her about life and how things are turning hard to her each every day. She had no idea how she will be taking her life forward, she was tired of struggling and fighting and all that she was able to think off was giving up on life.
It seemed to her that once her one problem was getting solved new one was waiting to jump into her life. Mother took her to the kitchen where she filled three of the water boiling pots and placed them on high flame. Soon the pots started to boil. In one of the pots she placed carrot, one had eggs and the last one had coffee beans. She didn’t utter a single word and kept on boiling the pots. Around thirty minutes, she switched off the flame and took about carrot kept them in a bowl followed up by eggs and placed it in another bowl. Then she poured the coffee out placed it in a cup. She asked her daughter to tell what is visible to her.
Eggs, carrot, and coffee as she replied in a confused tone. The mother came closer to her and asked her to touch the carrots and feel it to which she felt the softness of carrot. She asked to take out the egg from the bowl and break it. She did as she was asked and pulling off eggshell she observed the boiled egg. At last, she took a coffee sip and smiled as she tasted the richness of the coffee. The daughter then asked why her mother was asking her to do all this.
The mother explained to her daughter that each of the objects went through the same adversity which was boiling water, but each had a different reaction to this situation. The carrot was strong at first, but turned out to soften, becoming weak at the end.
About the egg it was fragile at first then thin shell was giving it the required protection, but under boiling water, the inside of the egg turned hard. The ground coffee beans changed the water taste and giving it its aroma.
Her mother then asked her which one out of these three are you? When the hardships will knock your door, how are you going to react like a carrot, a coffee bean or an egg?
This is for you to think now, are you that carrot who seems to be hard, but once it goes inside the trouble melts down and lose all the strength that it has or the egg that is malleable on heart but with the heart, it can change. The coffee beans that change the hot water taste giving its presence in the water and releasing the aroma, but the coffee itself lost its character by melting down in water with pain.
When the problems keep on falling to you one after another that is the time you have to show that you are capable of facing each problem with your inner strength.