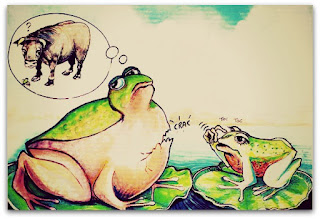 Some little frogs had an uncommon experience down a meadow. They came home excited to report their adventure. “Oh, mother,” said one of the little frogs, all out of breath, “we have just seen the most terrible monster in the entire world. It was large, with horns on the head and a long tail and hoofs.”
“Why, my child that was no monster. That was only an ox. He is not so big. If I really put my mind to it I could make myself as big as an ox. Just watch me!” So the mother frog blew herself up. “Was he as big as I am now?” she asked.
“Oh, mother much bigger,” cried the little frogs. Again the mother frog blew herself up and asked his children if the Ox was as big as that. “Bigger, mother, a great deal bigger”, said the children jointly.” “If you blow yourself up until you burst you could not be as big as the monster that we saw in the meadow.”
Provoked by their words, the old frog made one more attempt. She blew and blew and swelled and swelled until something unusual happened. The mother frog had burst.
Moral: False pride leads to ruin.