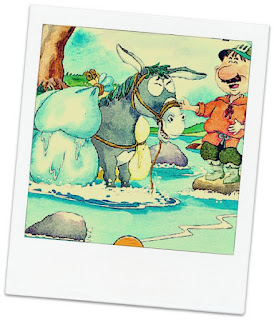 There lived a certain merchant in some village. He dealt in salt. A rumour reached him that salt was cheap at the seaside. So he rode on his own horse and started for the seashore to buy some. There he loaded the poor beast with as much as he could bear and started for home.
As they were passing by a small stream he stepped on a slippery rock and fell into the stream below. He immediately tried to get to the bank but could not. In the meantime, some salt was dissolved and the beast got relief to some extent. He could easily get to the bank and pursued his journey homeward light in body and spirit.
The merchant, without losing heart, set out again on the seashore for a load of salt. He loaded the animal with few more sacks of a load.
While returning, they were to cross a           bridge on the same spot. As they were on the bridge the ass fell down on purpose. As before, the water dissolved a large portion of the salt and freed him from his heavy load.
Very much provoked by his loss, the master began to find out how he could cure the animal of his tricks.
So, on his next journey, he loaded the horse with a few bales of cotton.  When they came to the same spot of the stream the beast repeated his old tricks once again. As soon as he fell into the river the bales of cotton became soaked with water. This time, instead of lightening the load, the water had more than doubled the weight of the bales. He then had to stagger home with great difficulty.
Moral: The same trick does not always work well