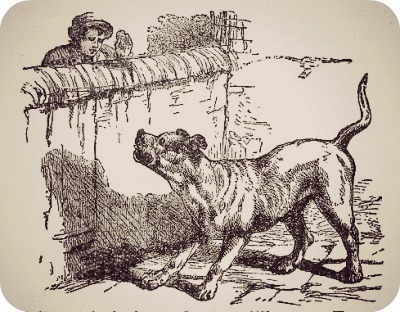 One dark night a thief came to a man’s house to rob it, and when the dog heard him he gave a loud bark. At this the man sprang from his bed to look out, but saw no one, nor did he hear the least sound, so he bade the dog be still, and then went back to sleep.
The thief in the meantime had hid in the shed in a state of great fear; but when he found that the dog was bound by a chain, now bark, he crept to the door of the house, and took out his bunch of false keys to try the lock.
The dog saw him, and set up his loud bark, so the man of the house put his head out once more to look round him, but as he saw no one, and found that all was no quite still, in a great rage he cries out, “Down , you brute! Down I tell you! You will not let me have a wink of sleep!”
So the dog left off, and in the meantime thief made his way to the house, and took all that he could find. The next day, when the man saw what had had been done, he said,  ”This will teach me to give ear to the voice of a warm and true friend when he warns me.”