Even in an age of e-mails and SMS messages, the postman is a part of our everyday lives, and letters still remain a very personal and persuasive way of communicating.

It has been estimated that there are around 600,000 post offices globally, and postal services have played an important role in the history and development of a country. 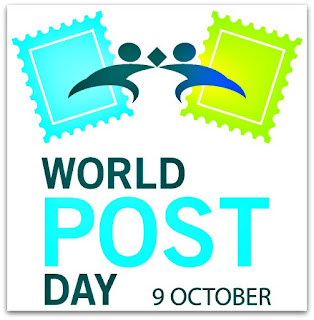 The UN has, therefore, declared October 9th as World Post Day, with the goal of creating awareness of the role of the postal sector in everyday lives. 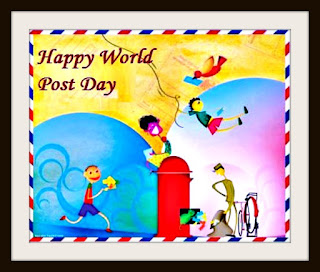 More than 150 countries celebrate World Post Day, and many of them use the event to promote postal products and services. In many countries, new stamps are issued. 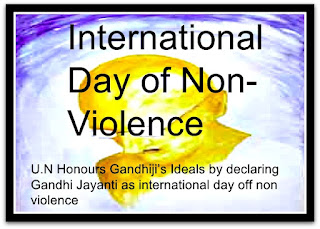 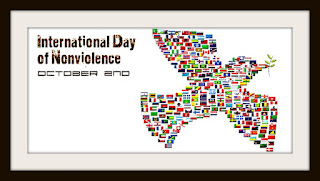 Mahatma Gandhi was the leader of the Independence Movement in India, and a great visionary who believed that non-violence was the only way to achieve not only freedom from British rule, but also to lead honest lives, to establish a just and caring society, and to achieve social and political change.

His philosophy caught the imagination of the world and inspired many civil rights movements. Today, the world observes this day in his honour and seeks to uphold his legacy through public awareness programmes. 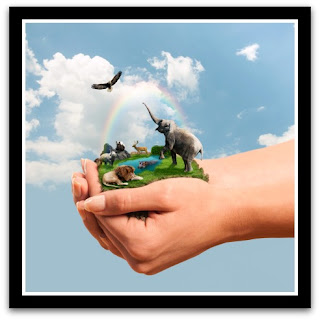 We must realise that the well-being of the human race is tied up in many ways- ecological, genetic, social, economic, scientific, educational, cultural, and recreational and aesthetic to the wellbeing of animals and plants. The United Nations General Assembly honoured wild animals and plants, particularly endangered and protected species, by designating March 3. as World Wildlife Day.

When is World Wildlife Day? We must realise that the well-being of the human race is tied up in many ways- ecological, genetic, social, economic, scientific, educational, cultural, and recreational and aesthetic to the wellbeing of animals and plants. The United Nations General Assembly honoured wild animals and plants, particularly endangered and protected species, by designating March 3. as World Wildlife Day. 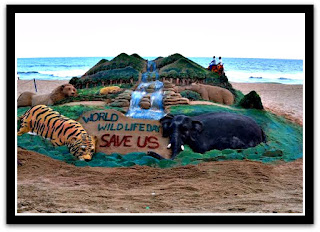 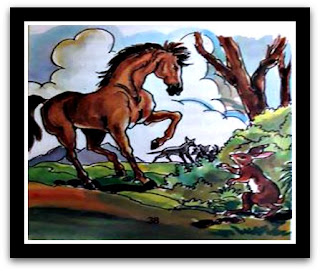 Once a hare lived in a forest. He had many friends there. He had many friends in the field too. So he truly felt himself be the most popular member of the animal kingdom. One day he heard a few hounds approaching.
“Why should always a popular animal like me have to run for life when he hears the barking of a dog?” said he to himself. So he approached the horse and asked him to carry him on his back and move to a place of safety.
“There is nothing that I cannot do for you, my dear friend.” said the horse, “but at this moment I have some important work to do for my master. However, a popular creature like you will have no difficulty in getting someone else’s help.”
Then the hare approached the bull and asked him whether he could help him in his danger.
The bull replied, “My friend, you well know how much I feel for you and how glad am I to be of your service. But at this very moment, I have an appointment with a lady. Why don’t you ask the goat, our mutual friend?’

But the goat also was busy. So was the ram. The calf, the pig, and the ass were equally busy. Each assured the hare off his undying friendship. Each was anxious to help him but none came forward to his aid. By this time the hounds came quite close. So the hare took to her heels and luckily escaped.

Moral: He who has many friends has no friend. 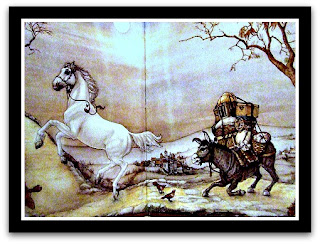 A man once kept a horse and an ass as beasts of burden. He usually folded the horse heavily until he barely staggers under the weight but he allowed the horse to prance along with a very light load.
One day as they proceeding along the road, the ass who had been suffering from some ailment for the past few days, said to the horse, Will you relieve me of a part of my load for some distance? I feel dreadfully unwell, but if you carry a fair portion of the load today I shall get well again. This weight is killing me.”
The horse did not pay heed to his words and told him not to trouble him with his complaints. The ass staggered along for about a mile silently, and then suddenly fell to the ground dead.
Just then the master came to the spot. Noticing what had happened he removed the load from the dead ass and put it on the horse’s back. “Alas,” groaned the horse, as he started off with the heavy load and the dead body of the ass in addition, “now I am rewarded for my ill-nature. By refusing to carry my fair share of the load, I now must carry the whole of it plus the weight of my poor companion.”
Moral: A bad temper carries with it its  own punishment. 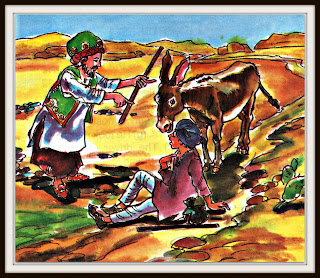 On a hot summer day, a young man had to make a long journey. He hired an ass for the purpose. He was riding on it. At midday, the sun became very hot. The scorching heat of the sun was unbearable to him. He thought he might faint. So he got down and took rest in its shadow. Then the driver of the ass disputed the place with him. He declared that he had an equal right to it with the other.
‘What!  exclaimed the youth. “Didn’t I hire the ass for the whole journey?” he asked. “Yes, of course, you did,” replied  the driver, “you hired the ass, but you did not hire its shadow.” They started quarrelling over the shadow for quite some time. The ass, in the meantime, felt the scorching heat intolerable and took to its heels and ran away.
Moral: Quarrel sometimes leads to loss, not gain. 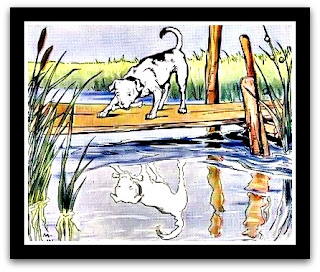 One day a dog stole a piece of meat from a butcher’s shop. He started running away with the piece to a place of safety. There he would eat it quietly without any disturbance. On his way to that safe place, he had to cross a foot bridge over a clear stream. When he had crossed half of the bridge he looked down. He saw his own reflection in the water. He thought the reflection to be another dog with another piece of meat. As he was a greedy dog, he decided to have that piece of meat also. Immediately he snarled and made a grab for the other dog’s meat. As the greedy dog opened his mouth the piece of meat dropped down and fell into the stream. Thus he lost his own piece.


Moral: Grasp all, lose all. 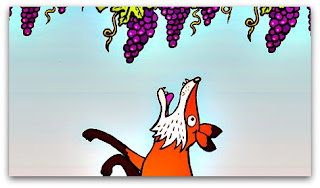 Once a fox was famished with hunger. He was thirsty too. He then moved hither and thither in search of food. At last, he entered a vineyard. The sun-ripened grapes were hanging from the vines high up. It was too high for him to reach. Aiming at the lowest bunch he took a run and a jump. But he missed. He tried again and again but in vain. At last, he ran out of energy, became exhausted and tired. He then last came out of the vineyard, muttering.”I never really wanted these grapes. I am sure they must be sour.”
Moral: Fools despise what they cannot achieve. 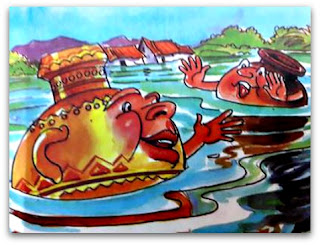 One day two beautiful pots, one of earthenware and the other one of brass, were carried downstream by a river in flood. The pot of brass begged his companion to remain as close by his side as possible, and he would protect him.
“You are very kind and sympathetic,” replied the earthen pot, “but that the cause for which I am afraid of. If you only keep your distance, I shall be able to go in my way safety. But should we come too close, whether I strike you or you strike me, I am sure to be the one who will get the worst of it.” 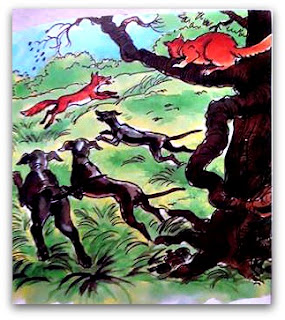 One day a fox was boasting of his cleverness to a cat. “I know a thousand tricks,” he bragged. “I know a hundred ways of escaping from my enemies, especially the dogs.”
“How much blessed you are!” said the ordinary cat.”I know only one trick. I make it work very often.
Will you please teach me new tricks of yours?’”Well, sometimes I have no work to do.” said the fox; I may teach some of the easier tricks then.”
Just at that moment, they heard the yelping of the pack of hounds. They were fast approaching the spot where the fox and the cat were gossiping. Like a flash of light the cat scampered upon a nearby tree and hid in the thick foliage? “This only trick I know and told you about,” she called down to the fox. “Which trick are you going to use now?”
The fox stood there still. He was trying to decide which of his many tricks he would adopt. The pack of hounds was approaching nearer and nearer. It was too late when the fox decided to run for life. But even before he started the dogs pounced on him and all the thousand tricks ended there.

Moral: One good plan working well is better than a hundred doubtful ones.