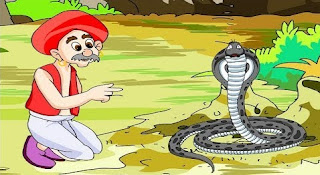 On a day of winter a farmer was returning home from the market. Suddenly he saw a snake lying half dead with cold by the roadside. He had compassion on the half dead snake almost frozen with cold. He took it up and placed it in the pocket of his coat to warm it. Then he hastened home. He put the serpent down on the hearth. Inside the hearth a cherry fire was blazing.
The farmer’s children watched it with great interest. They rejoiced to see the coiled snake reviving. One of the children knelt down. As he struck the snake gently it raised its head and darted out its fangs. It would have stung the child to death. The farmer noticed it and quickly seized his mattock. Then with one stroke he cut the serpent into two.

Moral : Gratitude is alien to the wicked’s nature.